How To Keep Score 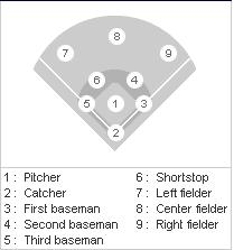 If the hitter grounds out to shortstop, for example, write in "6-3," which shows the shortstop threw him out at first base. If the hitter flies out to left field, write a "7." If the batter gets a hit, write in the hit according to which base he reached. Each corner of the box represents a base, with the lower-right corner being first. If he singles, put a "-" in the lower right. If he doubles, write a "=" in the upper right, and so on. For a walk, use "BB" in the lower right. As the runner advances, mark the appropriate symbol in the appropriate corner. If a runner scores, put a circle at the bottom of the box, and inside the circle put the symbol of the play and/or the player that drove him in. For example, if the No. 5 hitter drives in two runs with a single, mark his single in the bottom right of his box and mark a circle with the number "5" in it in the boxes of the runners who score (Some people like to use uniform numbers here, so you can tell who did what, even after lineup changes). At the end of each inning, total the hits and runs for that inning only. At the end of the game you'll be able to add the innings total to get the game score. 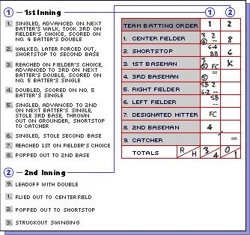 ace -- A team's best starting pitcher.
alley-- The section of the outfield between the outfielders. Also "gap."
around the horn -- A double play going from third base to second to first.
backdoor slider -- A pitch that appears to be out of the strike zone, but then breaks back over the plate.
bag -- A base.
chop -- A ground ball that hits in front of home plate (or off of it) and takes a large hop over the infielder's head.
bandbox -- A small ballpark that favors hitters.
bang-bang play -- A play in which the baserunner hits the bag a split-second before the ball arrives or vice versa.
basket catch -- When a fielder catches a ball with his glove near belt level.
Bronx cheer -- When the crowd boos.
brushback -- A pitch that nearly hits a batter.
bush -- Also "bush league." An amateur play or behavior.
can of corn -- An easy catch by a fielder.
caught looking -- When a batter is called out on strikes.
cellar -- Last place. Also "basement."
cheese -- Also "good cheese." Refers to a good fastball.
chin music -- A pitch that is high and inside.
circus catch -- An outstanding catch by a fielder.
closer -- A team's relief pitcher who finishes the game.
cutter -- A cut fastball (one with a late break to it).
cycle -- When a batter hits a single, double, triple and home run in the same game.
dinger -- A home run.
dish -- Home plate.
fireman -- A team's closer or late-inning relief pitcher.
fungo -- A ball hit to a fielder during practice. It's usually hit by a coach using a "fungo bat," which is longer and thinner than a normal bat.
gap -- See "alley." A ball hit here is a "gapper."
gopher ball -- A pitch hit for a home run, as in "go for."
heat -- A good fastball. Also "heater."
high and tight -- Referring to a pitch that's up in the strike zone and inside on a hitter. Also known as "up and in."
hill -- Pitcher's mound.
homer -- A home run. Other terms include: blast, dinger, dong, four-bagger, four-base knock, moon shot, tape-measure blast and tater.
hot corner -- Third base.
in the hole -- The batter after the on-deck hitter.
jam -- When a hitter gets a pitch near his hands, he is "jammed." Also when a pitcher gets himself in trouble, he is in a ""
leather -- Refers to how good a player plays defensively or handles the glove. Ex: "He flashed some leather on that play."
meatball -- An easy pitch to hit, usually right down the middle of the plate.
line -- A batting average of around .200.
moon shot -- A very long, high home run.
nail down -- As in "nail down a victory." Refers to a relief pitcher finishing off the game.
on the screws -- When a batter hits the ball hard. Also "on the button."
painting the black -- When a pitcher throws the ball over the edge of the plate.
pea -- A ball traveling at high speed, either batted or thrown.
pepper -- Pepper is a common pre-game exercise where one player bunts brisk grounders and line drives to a group of fielders who are standing about 20 feet away. The fielders try to throw it back as quickly as possible. The batter hits the return throw. (Some ballparks ban pepper games because wild pitches could land in the stands and injure spectators).
pick -- A good defensive play by an infielder on a ground ball. Also a shortened version of "pick-off."
pickle -- A rundown.
punchout -- A strikeout.
rhubarb -- A fight or scuffle.
ribbie -- Another way of saying RBI. Also "ribeye."
rope -- A hard line drive hit by a batter. Also "frozen rope."
rubber game -- The deciding game of a series.
run-down -- When a baserunner gets caught between bases by the fielders.
Ruthian -- With great power.
seeing-eye single -- A soft ground ball that finds its way between infielders for a base hit.
set-up man -- A relief pitcher who usually enters the game in the 7th or 8th inning.
shoestring catch -- A running catch made just above the fielder's shoetops.
southpaw -- A left-handed pitcher.
sweet spot -- The part of the bat just a few inches from the barrel.
table setter -- Batter whose job is to get on base for other hitters to drive him in. Usually a leadoff or No. 2 hitter.
tape-measure blast -- An extremely long home run.
tater -- A home run.
Texas Leaguer -- A bloop hit that drops between an infielder and outfielder.
tools of ignorance -- Catcher's equipment.
touch 'em all -- Hitting a home run (touching all the bases).
twin killing -- A double play.
Uncle Charlie -- Curve ball.
utility player -- A player who fills in at many positions.
wheelhouse -- A hitter's power zone. Usually a pitch waist-high and over the heart of the plate.
wheels -- A ballplayer's legs.
whiff -- Strikeout.
yakker -- Curve ball.